Discover the Pearl of Zahorie region 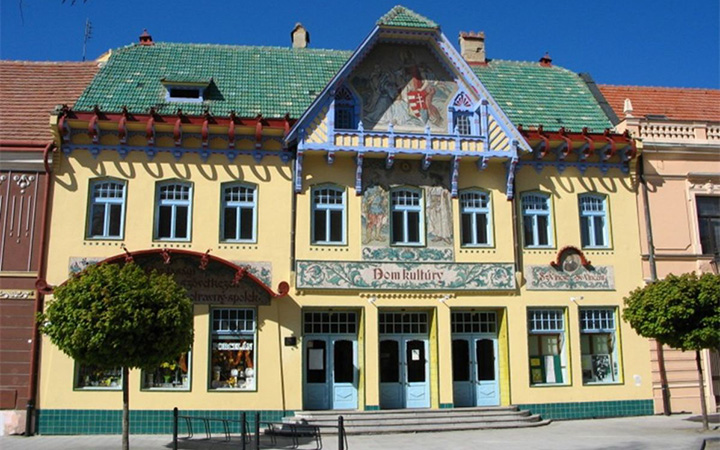 Come with us on a walking tour through historical town of Skalica, nicknamed as the “pearl of Zahorie region”.
Read our short travel blog and watch our Thursday’s LIVE virtual tour on our Facebook page Best Slovakia Tours. (Live stream will be on Thursday, September 3, 2020, but you can watch it whenever afterwards).

Skalica town (15 000 inhabitants) is notable for being one of the oldest towns in Slovakia. It is located in the western Slovakia in Trnava region, close to the borders with the Czech republic.

What is SKALICA famous for?
Except of the historical beauties it is a delicacy Skalicky trdelník and Skalický Rubín wine. And not to forget the hockey club HK36 Skalica.

I like to start our walking tour in the heart of the town, on a triangular square called Námestie slobody (Freedom’s square). The shape of the square is unique in Slovakia.

The dominant feature is the 14th century gothic Church of St. Michael the Archangel. A renaissance tower was later added and offers extraordinary views from its balcony (after climbing 120 steps).

Next to the church is a late-gothic chapel of St. Anna from the 14th century, originally, it served as a small church in the cemetery around it. Significant burghers were buried here.

On the beautifully reconstructed square we can admire Dom kultúry a Záhorské múzeum (House of Culture and Zahorie museum), one of the architectural beauties of Skalica. Built in the 20th century, located near the St. Michael the Archangel church.

Designed by prominent Slovak architect Dušan Jurkovič in the art nouveau style and opend in 1905. The mosaics by Czech painter Mikolas Ales symbolizing  Czech and Slovak solidarity decorate the exterior facade of the building.

Town hall, originally Renaissance building was reconstructed into the Baroque style, in the 19th century it got its current look in Classicist style.
Note, 1918, when the Austria-Hungarian empire came to an end, the building was used for a short time as the seat of the first Czechoslovak temporary government for Slovakia.

Among other important sights belong.

The Franciscan gothic church of virgin Mary and monastery, several times rebuilt.
The order came to Skalica in the 15th century and played an important role in its history.
To the complex of church and monastery belongs so called “black kitchen” where the famous pastry Skalicky trdelnik is prepared in a traditional way.

The Jesuit church of St. Francis Xaverius (originally built by the evangelists)

František Xaverský represents patron saint of the Jesuit order and patron saint against the black plague. There are mysterious crypts in the underground and you can visit them. Next to the church is the monastery and school. 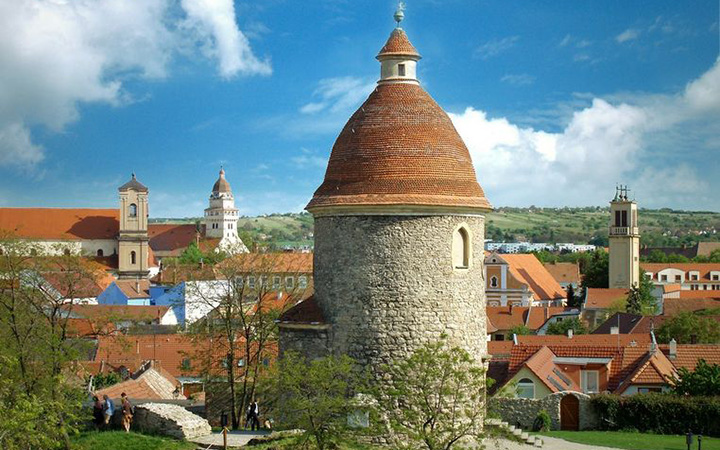 The oldest building is undoubtedly Rotunda of St. George from the 12th century, built in romanesque style, its upper part was used for protection and the lower part as a chapel. Near the Rotunda, there’s a Calvary complex.

Not to forget to mention, mill of the brother’s Pilarik, house called Ľadovňa (ice-house), in the past used for storage of food. They brought ice from nearby ponds, then exposition of the book publishing (history goes back to the 17th century).

Town’s hall seat is in a spectacular building located on the main square (after 1918, after the fall of Austria-Hungary, it was here a temporary seat of the Czecho-Slovak government).

A little bit of history
The first written evidences comes from 1217, a settlement named Zakuleza, later Zakolcha, from these names came name Skalica and German name Skalitz. The name comes from the word skala, which is probably due to the rocky terrain in the area.

Firstly, in the 13th century, the settlement belonged to the counts of Sv. Jur and Pezinok, later in 1372 became Free Royal town (privilege granted by Hungarian king Louis I from the Anjou dynasty) with right of sword and fortifications around the town.

In the 15th century, the Franciscan order came to Skalica and built a monastery and settled down.

Thanks to additional privileges of Hungarian king Sigismund Luxemburg Skalica was an important commercial centre.

During the 17th century, orders of Jesuits, Karmelits’s came and settled down.

The town had its own vineyards, ponds, distillery, brewery. The citizens of Skalica were famous for wine making (300 years ago they established Brotherhood of St. Urban, fro this period is also a famous little church of St. Urban with altar of winemakers. St. Urban was a patron saint of wine makers) and as great craftsmen.

17th – 18th century
The town’s development was slowed down due to Anti-Habsburg uprisings, fires and epidemics, but at the end of the 18th and 19th century the times of prosperity went on (It was built a town hall, Jesuit church and monastery, rebuilt Franciscan church and monastery and many other buildings.) 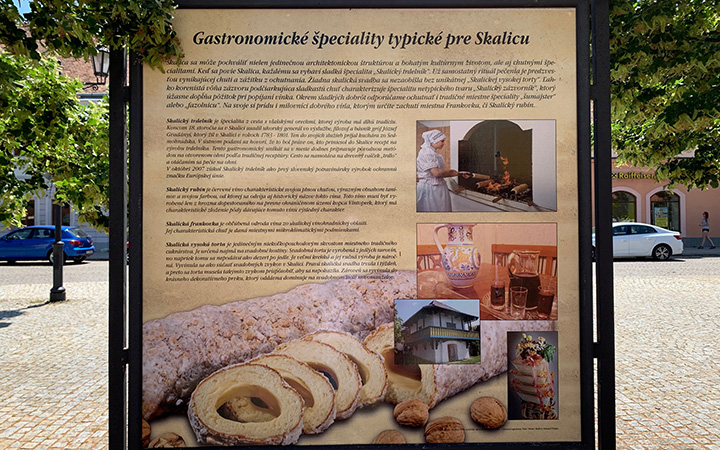 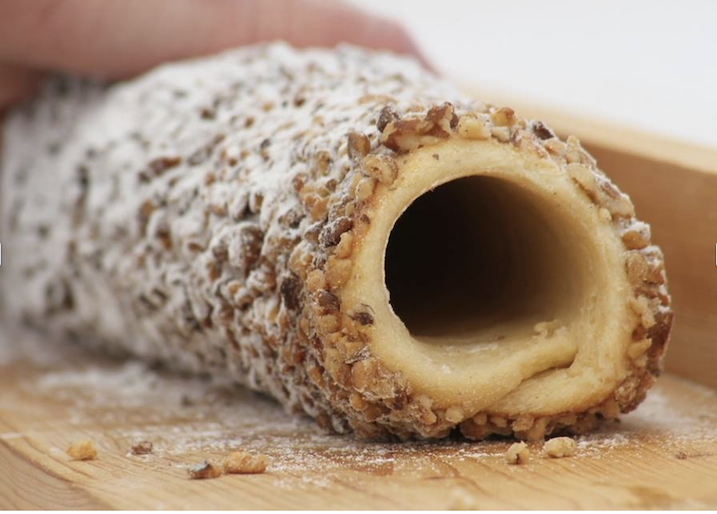 A must-to-try once in Skalica is Skalický trdelník.
This culinary delicacy is a slightly leavened cake, sprinkled with walnuts , sugar and baked on an open fire in a traditional way by reeling the dough on a tube called “trdlo”. Trdelnik has obtained an EU trade mark.

It has a long history, it is believed that at the end of the 18th century came to Skalica a Hungarian general (also a poet and philosopher), count Jozsef Gvadanyi who took a cook from Sedmohradsko (Transylvania). And that was the cook who brought the recipe with.

Where to try it? One of the top places is Vinotéka u Františkánov located in the former Franciscan monastery. (street Kralovska 16, 909 01 Skalica)

Wine tradition
Skalica – the ancient town lying in the wine region in the triangle between Austria, Czech republic and Slovakia, is known by its famous wines. The main wine is Frankovka.

Skalický Rubín,  – the famous regional red wine
Wine lovers can visit Vinotéka u Františkánov and try the special dark red, thick wine Skalický Rubín (named after the precious stone Ruby = Rubín, due to its colour). It is a unique blend of St. Vincent and Portugal varieties into Frankovka.

About Záhorie region
It is a region north from Bratislava (on north-west the river Morava creates a state borders with Czechia and Austria, on the north are White Carpathians and on the east are Small Carpathians).

Záhorie means “za horami = behind the mountains” as it lies behind Small Carpathians. (And if you would like to have deeper knowledge, it is further divided into Upper zahorie, lower zahoria and middle zahorie)

In Zahorie, people speak with a dialect called záhoračtina (during the Great Moravia empire, 9-10th century,  it was a part of Morava principality)

What to visit in the region?

Baťov kanál (Bata’s channel)
In the 1930’s it was built as a waterway for watering the region.
The famous Bata company owned coal mine and used this waterway for transportation of coal.

Nowadays, it is a popular tourist attraction, you can take a boat from Skalica and end in Otrokovice in the Czech republic. The total lenght is 60km.

Holíč town
The Holic castle is a baroque building. Among the most famous owners belonged Francis Stephen, duke of Lorrain, husband of empress Maria Theresa. (apart from Bratislava, Holic town was the only imperial seat in Slovakia). During these times the castle was rebuilt into a beautiful summer residence for the royal family.

Kopčany town
In this small village surrounded by the fields, there is a tiny romanesque church (hidden in the fields) dedicated to St. Margaret of Antioch.
It is also interesting to mention that Tomas Garigue Masaryk (the president of the first Czechoslovakia) had his roots here.

Šaštín Stráže
Did you hear the story of countess Angela and her husband Imrich?
Imrich had been treating his wife badly and left her stranded in the forest of Sastin. Angela, was frightened and began to pray to the Virgin Mary for help as well as improvement in her marriage.

In the prayer she promised to build a wooden statue of the Our Laday of the Seven Sorrows if her prayers were answered.

It happened.From then on, she and her husband lived happily and in harmony.

At the site of a series of  additional miracles, the Order of Paulines built a pilgrimage church and monastery during the first half of the 18th century. The church, an excellent example of baroque architecture, was consecrated in the presence of empress Maria Theresa and her husband Francis Stephen.

Golf resort
If you like playing golf, you will enjoy Penati Golf resort, ranked among the 100 Best Golf courses in Europe. The tall pine trees and naturally sandy soil create  a wonderful natural setting only an hour an half from Bratislava.

Nowadays, Skalica is a modern city.

If you are an ice hockey fan, you will certainly know professional ice hockey player Žigmund Pálffy, born in Skalica (used to play in NHL New York Islanders and Los Angeles Kings), he started his carrier in hockey club HK 36 Skalica.

Thanks for reading my travel blog.
I do believe it was useful, interesting, and motivational for you.

Are you planning a tour around Slovakia and you would like to put Skalica on the list? Let us know and we will include it on your itinerary.

The upcoming events you can check out on our Facebook page.

Discover the Pearl of Zahorie region