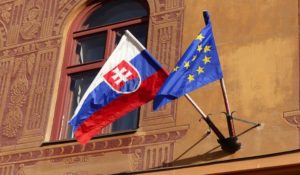 The National Assembly ( Parliament) it is the legislative power, its 150 members are elected for 4 years term.
The supreme body of the executive power is the government with the chairman at it head.

Slovakia is lying in Central Europe.
The central & northern Slovakia is mountainious and the southern and eastern part of the country is a lowland

5 July – St. Cyril & Methodiu’s Day
29 August – Anniversary of the Slovak National Uprising
1 September – The Day of the Constitution of the Slovak Republic
17 November – The day of the Fight for Freedom and Democracy

Climate:
The Slovak Republic has a mild, continental climate, with generally cold, dry winters and warm (sometimes hot), moist summers.
Temperatures will vary according to elevation in the many mountainous areas. The warmest and driest regions are the southern plains and the eastern lowlands. In those areas the average temperature is 10 degrees of Celsius, and the average annual rainfall is near 500mm. Heavy snow with significant accumulation is common at higher elevations in Tatra mountains during the winter months.

Currency:
The currency in use is euro. The euro is divided into 100 cents. Notes and coins of the following denominations are in circulation:

Credit cards:
Major credit cards (American Express, Diners Club, VISA and Eurocard/Mastercard) and debit cards (Maestro and Visa Electron) may be used to withdraw cash from ATMs and for payments in hotels, restaurants, shops and petrol stations.
Credit cards can also be used to obtain cash.

People:
The Slovaks are descendants of a Slavic people who settled near the Danube between 400 and 500 AD .The population is about 85% Slovaks.
Hungarians, concentrated in the southern border districts, form the largest minority. Czechs, Germans, Jews & Poles are found throu ghout the nation, while Ruthenians are concentrated in the east and northeast part of the country. There is a sizable population of Roma, Gypsies, which is a derogative form, who are found mainly in the eastern part of the country.

Children until 12 years of age must not be seated on front seat.
The safety belts have to be always fastened on all seats.

Calls are free of charge from a mobile phone or any phone booths.

Slovakia has been subdivided into 8 autonomous regions:
Bratislava region with the capital Bratislava city (415000)

Slovak flag:
The official flag of Slovak Republic is composed of three equal horizontal stripes:
White (at the top )
Blue (in the middle)
Red (at the bottom )

And a coat of arms of Slovakia, a double cross on a three mountains centered on the hoist side.
Slovak flag, in common with other Slavonic nations, uses the red, white and blue colours.

Slovak anthem:
The score for “Lightning over the Tatras” was written in 1884 by Janko Matuska

Health:
Tap water is fluoridated and safe to drink. Bottled water is very popular among the local citizens as their source of drinking water.
There are no particular health threats associated with living there. It is advisable that persons with chronic conditions requiring prescription medication should keep a one to three month supply on hand.

Telephones:
The country code to dial into Slovakia is +421.
To dial overseas from Slovakia dial 00 followed by the relevant country code and phone number.
Mobile telephone use is widespread in Slovakia. Setting up a mobile phone account is a simple process. Cellular telephone service is available from three providers, T-Mobile, Orange and O2. Details of their services may be obtained in English from their respective websites.

We are glad and ready to help you.