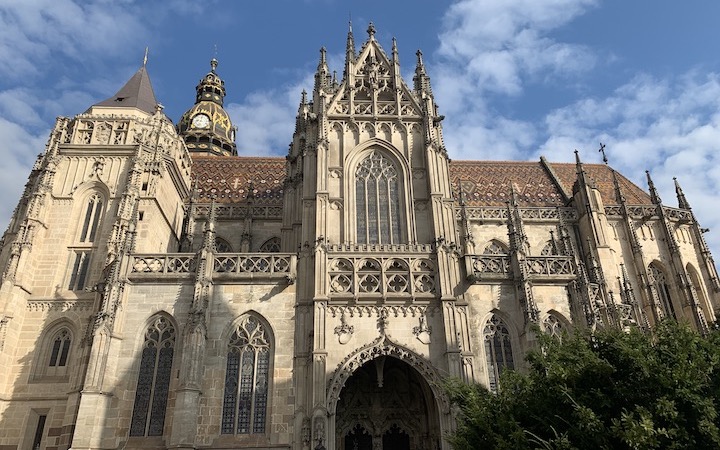 I feel wonderful everytime i come to Kosice and start walking on Hlavna street (that’s the main square with an original shape of a lense). Everytime i am impressed with all the sights, with all the parks and with my favorite singing fountain. And there is so much more to discover. Read our travel blog and watch our short video on our YouTube channel. Enjoy! 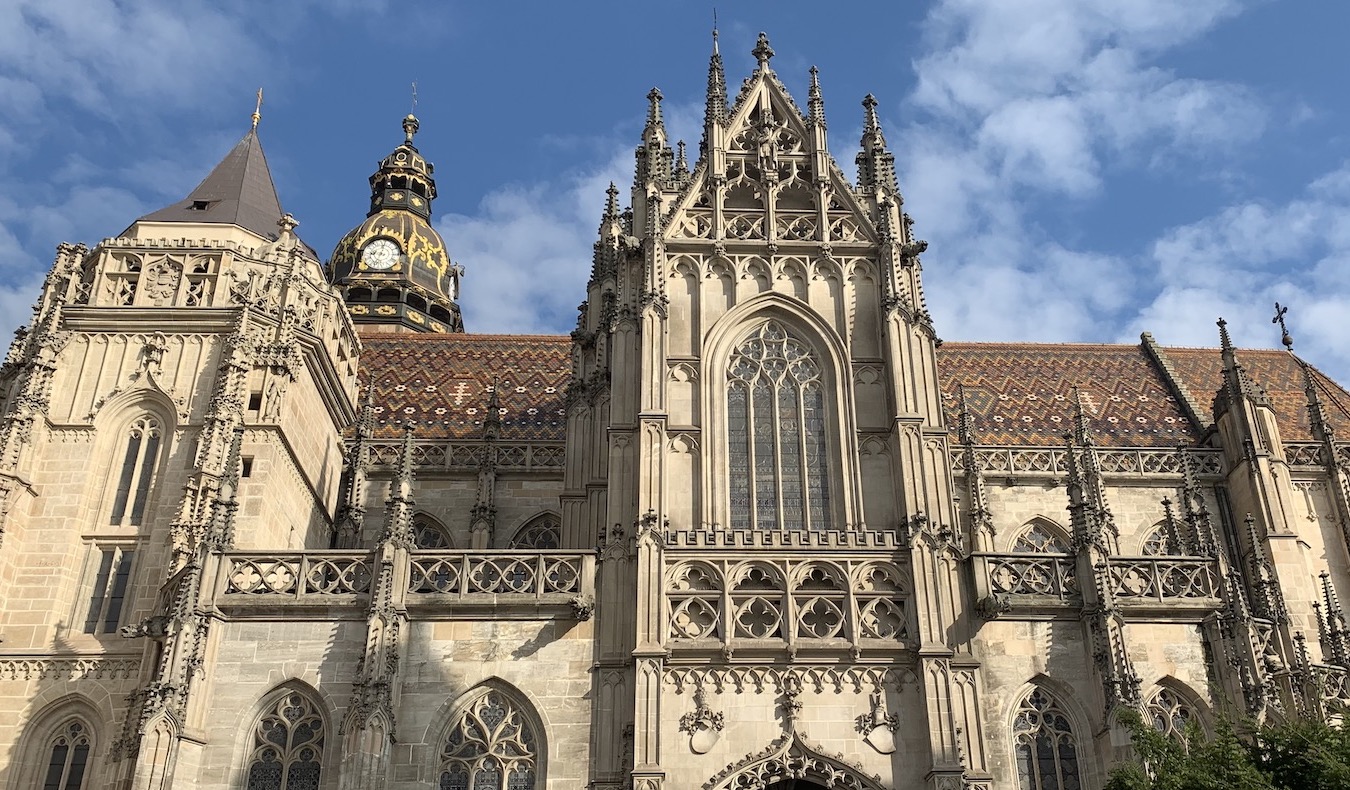 INSIDE THE SAINT ELISABETH CATHEDRAL – THE MAIN ALTAR 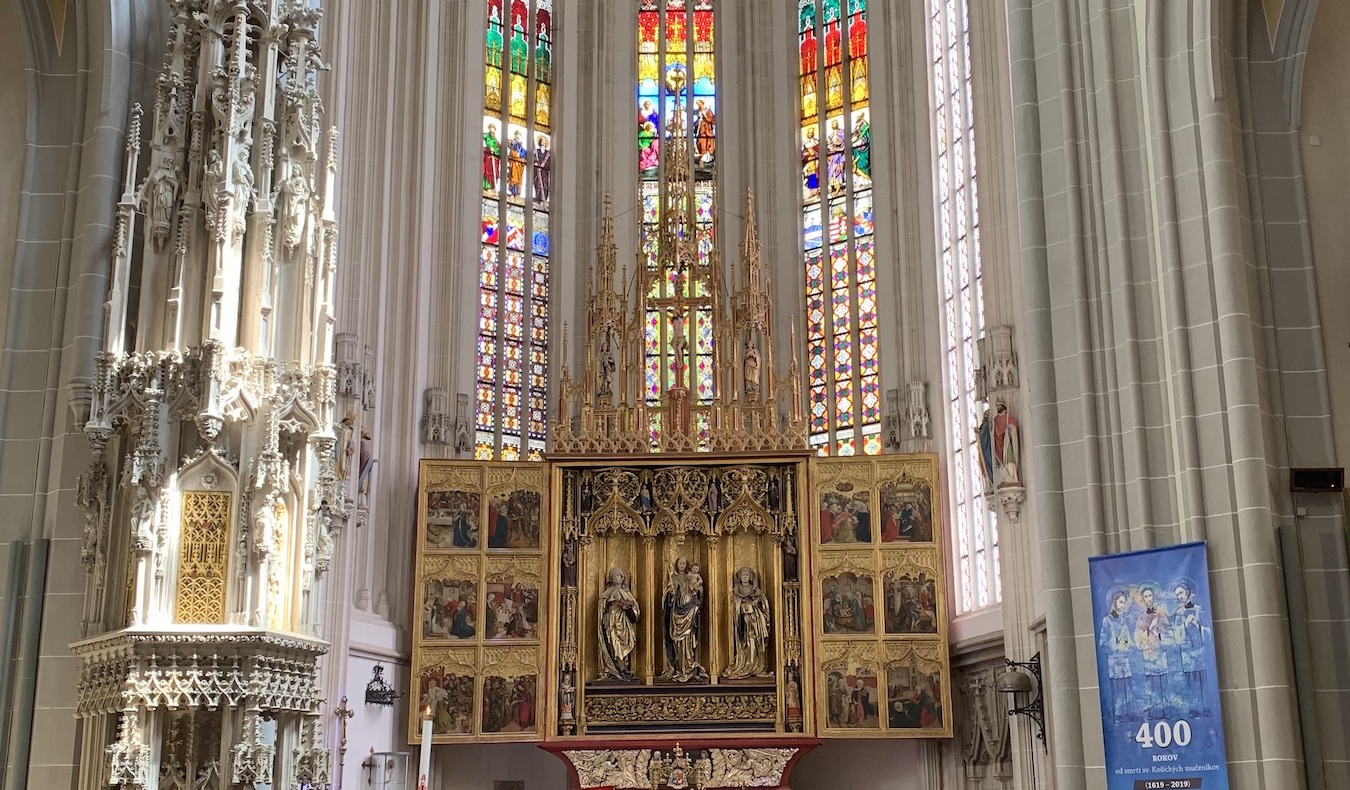 Kosice is the 2nd largest city of Slovakia (240 000) with a rich history, plenty of sights, tasty restaurants, lovely cafe’s and you will fall in love with an amazing atmosphere of this city.
13 years ago, i included Kosice on our itineraries and we visit regularly Kosice on our numerous private tours, on our premium Grand Tour of Slovakia as well as Slovakia Heritage Tour.

Saint Elisabeth Cathedral – undoubtedly – the absolute highlight of the square, impressing from all sides. It is the largest gothic Cathedral in Slovakia. And the interior. Breathtaking would be the best word to describe it.
Building work started around the year 1380 on the site of the previous romanesque parish church.
The Cathedral was damage by fire (1556, 1775), by earthquake (1834), flood (1845). In the 19th century, it was extensively reconstructed.
The Cathedral together with St. Michael’s chapel and Urban tower has been declared a national cultural monument.

If you don’t mind climbing the stairs (161), then, get to the top of the church tower (no elevator, just stairs) and enjoy breathtaking, bird’s eye views. (there’s a small extra fee, but, it is definitely worth it).

Saint Michael’s Chapel – stands on the site of the former town cemetery. It was built at the turn of the 13-14th century in a Gothic style. It is unique in the details.

The Urban’s town – was originally called “Red”. It was built in the late 14th century, several times destroyed by the fire and rebuilt again.
The reconstructed bell standing in front of the tower, named Urban, worked from 1628 until 1966. 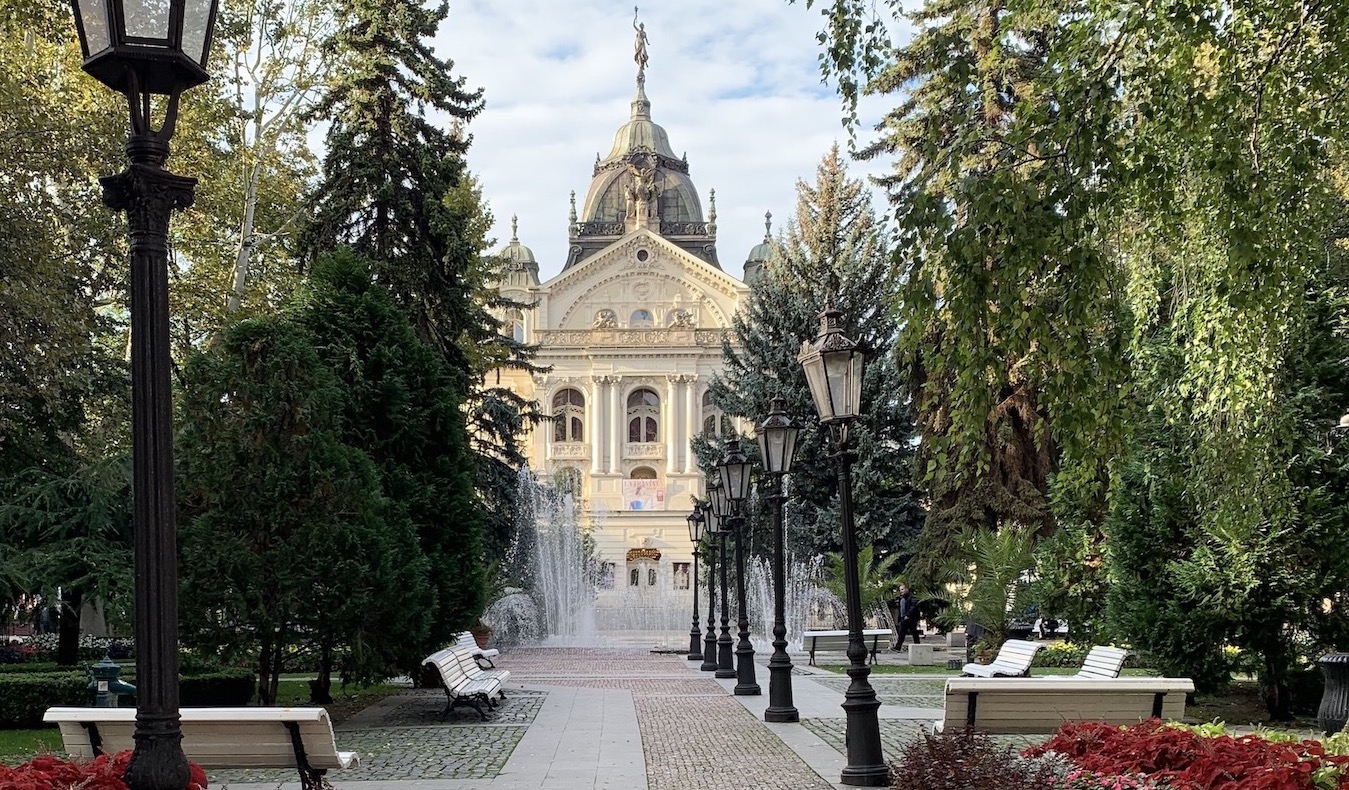 State theatre – built between 1897-1899, designed by Adolf Lang, one of the most talented European architects of the 19th century. The style is eclectic with elements of neo-baroque and secession.

Singing fountain and the park– located between the State Theatre and the Cathedral. Loved by locals as well as by tourists, it offers a great place where to relax (and enjoy your ice cream).

The Immaculata – it is a group of statues surrounding the Marian column, it represents the most beautiful Baroque style monument in the city.
It was built between 1720-1723 as an expression of thanks after the decline of the terrible plague epidemic.

Jesuit church (church of the Holy Trinity or also called the University church) – it is a unique structure, the exterior gives the impression of athe Renaissance, but the interior is pure Baroque style.
Originally built by the Jesuits, then taken over by the Premonstratensians which still use the church.

Jacab’s palace -built in 1899 in neo-Gothic style, bears a name of a leading 19th century entrepreneur, who built it as his family seat

ONE OF THE OLDEST EUROPEAN COAT OF ARMS 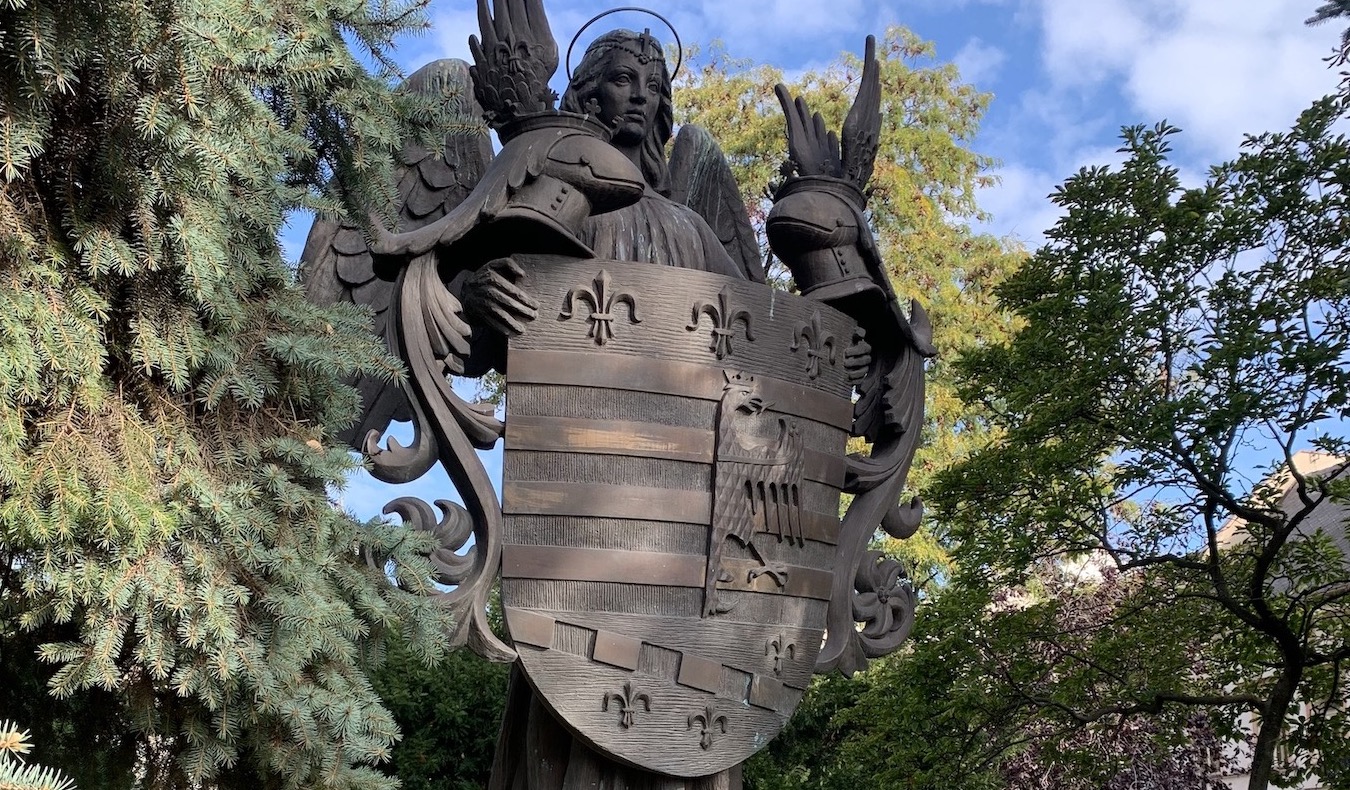 The Andrassy Art Nouveua house – built in 1899, today at the corner you can find a pastry shop and ice cream.

The Beggar’s house (house #71 on Hlavna street) – the foundations of the house are from the 14th century, the house was rebuilt in the 18th century.
Legend has it that the beggar (figure on the top) financed the building from the money he begged. Today, this facade belongs to the most attractive in the city.

The Levoca house (house #65 on Hlavna street) – almost 500 years old house, in 1542 palatine Thurzo gave the house to the town, since then it is known as Levoca house. (rebuilt in the 17th century in a Renaissance style).

The remarkable Art Nouveau building known as the Slavia cafe was built after 1900 by the well-known Kosice brewer Konstantin Bauernebl. 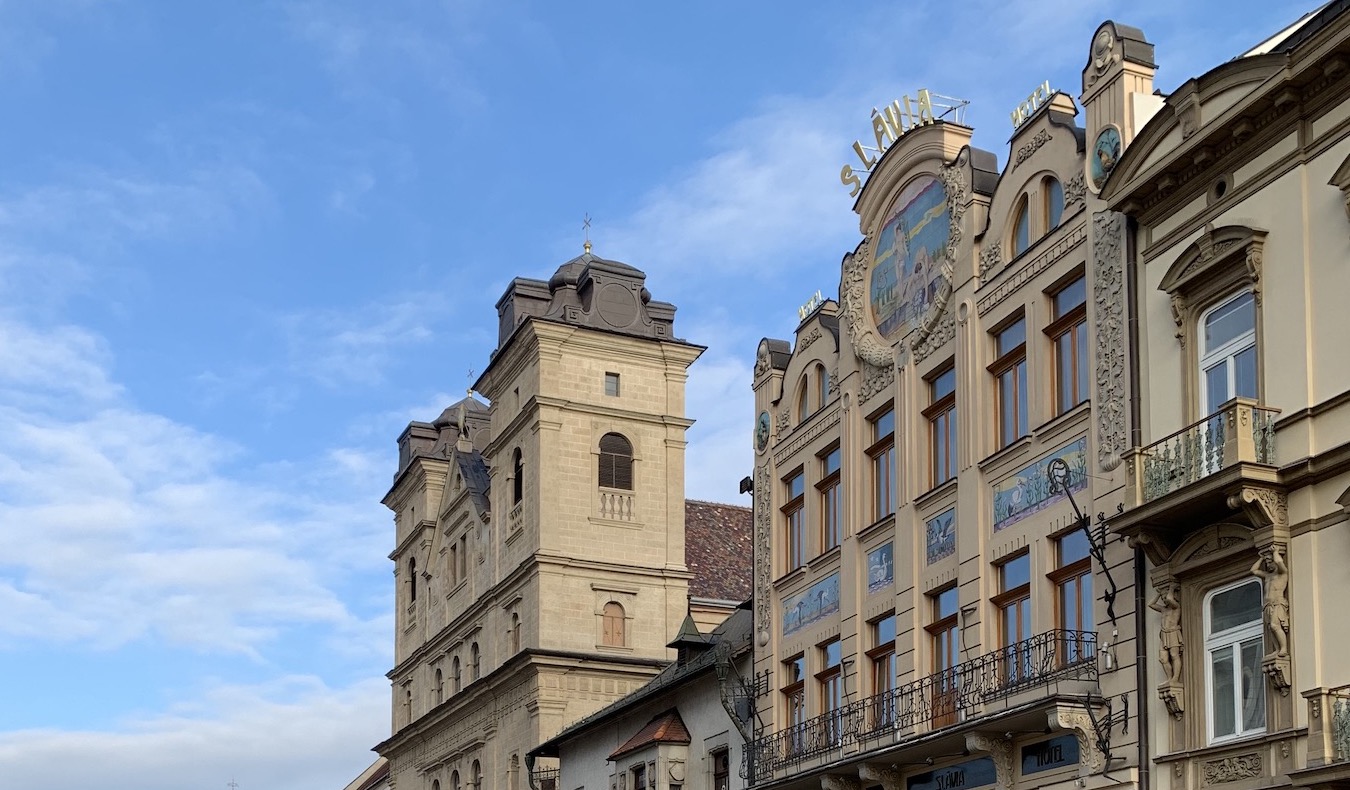 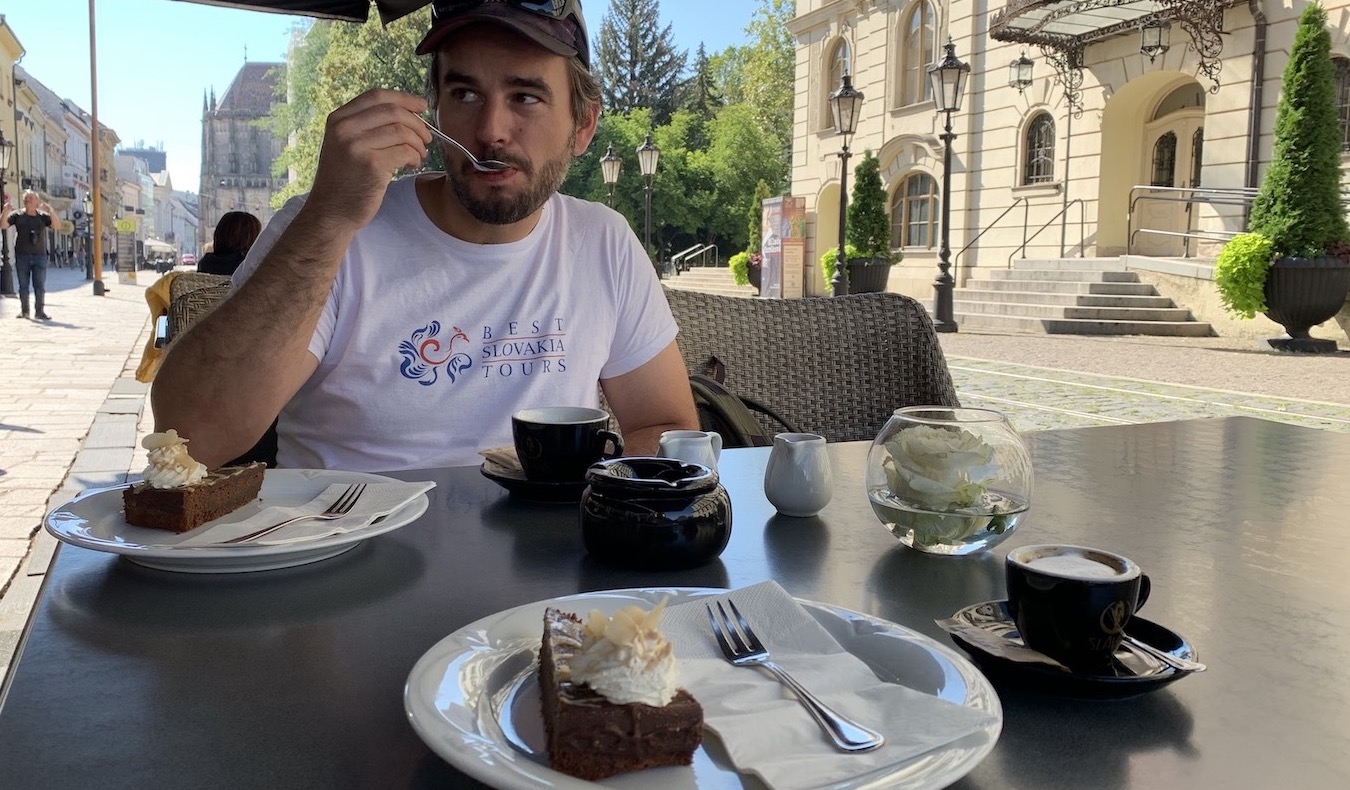 Dominican church (Assumption of the Virgin Mary) and monastery – located on a small square belongs to the oldest (13th century) still standing building in the city.

A SHORT HISTORY OVERVIEW
Kosice – in latin “Cassovia”, in German “Kaschau” and in Hungarian “Kassa”. The first written mention of Kosice is from 1230, but at this time the village in this place already had a church.
After the Tartar invasion (1241-1242), Hungarian King Belo IV invited German colonists to come and settle here.
The Saxon colonists working together with the local Slavic population created a town which by the end of the year 1290 already had the first stone fortifications built around it.
Kosice in this period was a centre for merchants and craftsmen.
Thanks to the location on an ancient trade route connecting the Black sea with the Baltic sea.

Kosice flourished during the 14th century, Kosice was granted a whole series of privileges, the most important in 1342 and 1347, awarding the city free royal status.

At the end of the 14th century, the city began building a new Gothic church – the Cathedral of St. Elisabeth.
Hungarian King Sigismund of Luxemburg, who reined over Hungary for almost half a century, supported the building of this cathedral and granted the city new privileges.
During the reign of King Matthias Corvinus Kosice had 10 000 inhabitants and belonged to one of the largest European towns.

Tokaj wine region
Only 1 hour by car from Kosice south-east you can reach a picturesque small wine region Tokaj.
Tokaj wines are (mostly) sweet, desert wines of exceptional quality.
They are produced from three types of grapes: Furmint, Lipovina and Yellow Muscat. Among famous villages where you can taste the very special wines belong Mala Trna, Velka Trna, Cerhov, Cernochov and Vinicky.

Did you know that also L. Beethoven, F. Schubert, F. Liszt and several popes liked this wine? The French King Louis XIV is the author of the famous saying: “Vinum regnum, rex vinorum”, which means “Wine of kings, king of wines”.

Zadiel gorge
In Slovak, Zadielska tiesnava, only 45min by car from Kosice, it offers a relaxing hiking in a lovely nature.

The manor house Betliar
Only 1 hour by car you can visit a beautiful, fairy-tale manor house with four corner towers surrounded by a lovely English park.
Inside you can find a picture gallery, music and hunting halls, library and antique furniture.
The most famous owners were the family Andrassy, they owned it from the 17th century until 1945, after WW2 it was nationalized and later it became a museum.

Ochtinska Aragonit cave
Unique not only in Slovakia, but also in the world for its white formations. The formations are from aragonite – a white/brown calcium carbonate material formed only under specific chemical and climatic conditions in an underground. The cave is on UNESCO World Heritage list.

Where to stay for an overnight?
We love the Double Tree by Hilton hotel. From the outside, it is not very special or charming, but, it offers first-class services, very comfortable and excellent equipped rooms, superb breakfast, A/C, bar, elevators and location in the city centre. And very pleasant staff.

There are many other 4star hotels, but we use this as a guarantee of quality and guest satisfaction.

Where to go for a tasty lunch/dinner?
These are our top choices, there are of course many more restaurants.


Would you like to visit Kosice on your tour around Slovakia?
Check out our premium GRAND TOUR OF SLOVAKIA