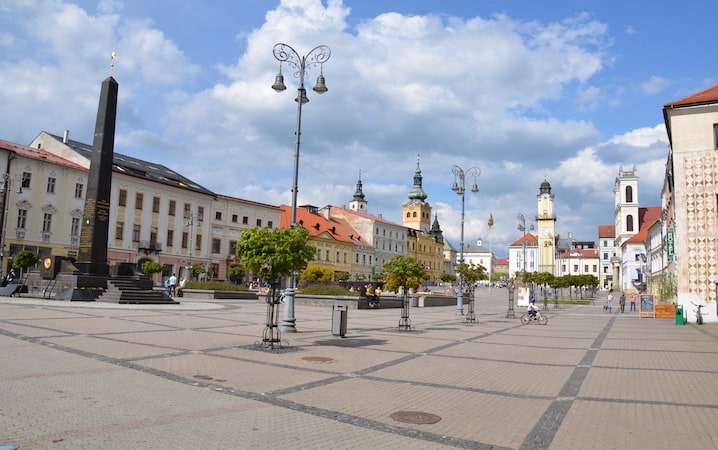 Come with us to the thrilling region of Banska Bystrica. A short travel blog during the COVID19 restrictions.

For our third Virtual tour, me and Martin (our colleague and top tour guide) we decided to travel to a picturesque Banska Bystrica city and the area around. Enjoy reading! 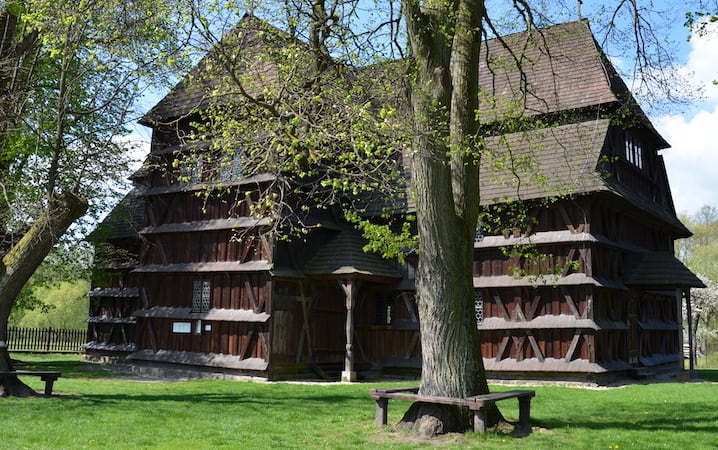 HRONSEK – PROTESTANT WOODEN CHURCH / UNESCO SIGHT
On the way, we stopped to see a hidden gem – the 18th-century protestant wooden church Hronsek – the UNESCO World Heritage site. We took pictures from the outside (interiors closed due to COVID19 restrictions) and enjoyed the blooming linden trees.

Did you know that the church was built without using a single nail?
The 18th century was a period of strong Catholicism (Present-day Slovakia was under the Catholic Habsburg rulers), the Lutheran church could be built in the area only under five strict conditions :
1, entire church had to be made from wood, 2, no tower was allowed, 3, no iron nails could be used, 4, had to be built within a year and 5, the main entrance could not face the village.
Hard to imagine these strict conditions, but, they all were successfully done and we can enjoy a lovely wooden jewel – church Hronsek. 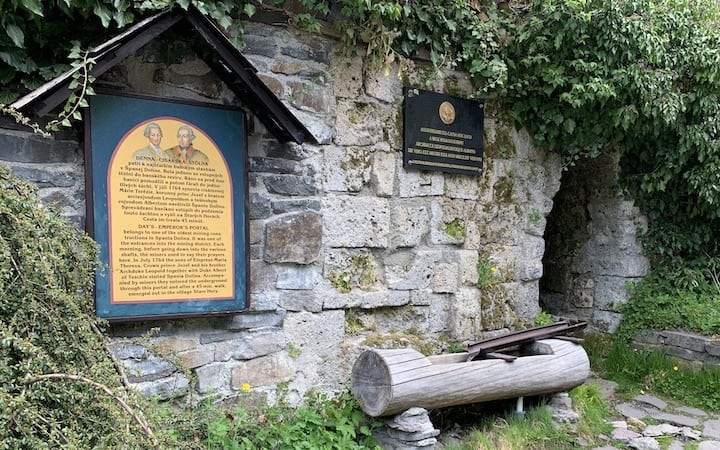 Relaxing walk on the winding road up to Halda hill 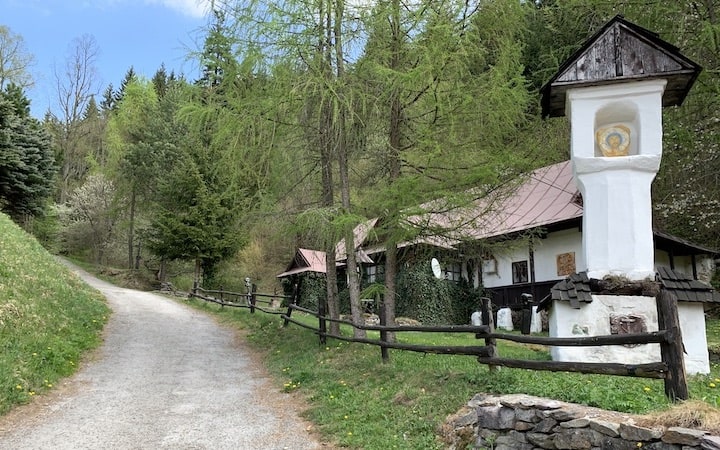 Breathtaking views from the top of Halda hill /  Spania Dolina 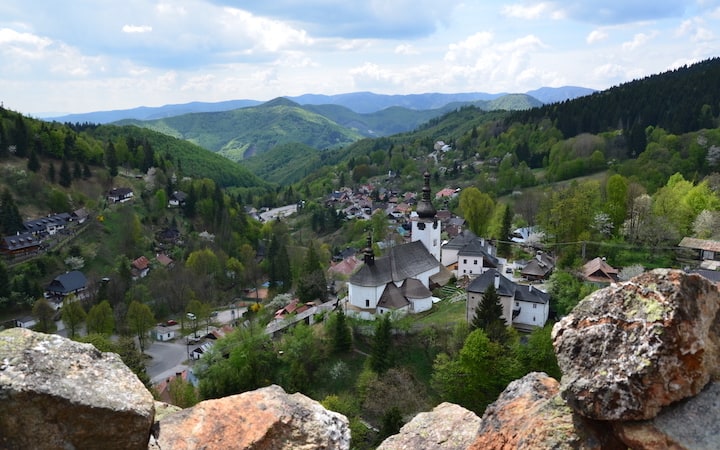 Spania Dolina, this marvelous little hidden village was also for centuries famous for its copper mining. No more mining here, but you can find plenty of adits, mining tools and even a great museum of mining history – HerrenGrund – here

Finally, we reached Banska Bystrica. One of the sayings says „Alive in Banska Bystrica, after death in Heaven“. Is this saying because of a well-preserved beautiful historical square or breathtaking location of the city – surrounded by Kremnicke hills and national parks of Velka Fatra and Low Tatra or is it the lively, vibrant atmosphere?

It is the largest Central Slovakian city (6th largest in Slovakia) and the capital of Banska Bystrica region (There are 8 administrative regions in Slovakia).

The city’s nickname is a „copper city“ due to its rich copper ores in the area and mining activities in the past centuries.

A short history overview
Due to rich mineral resources, Banska Bystrica settlement became more and more important and in the 13th-century Hungarian king, Belo IV gave to the settlement city status and granted privileges such as Free Royal town. As golden age is considered the 15-16th century during the successful Thurzo-Fugger mining company. The main income of the town was for centuries from the mining. Banska Bystrica belonged to the 3 richest Central Slovak mining towns. (if you read our blogs regularly, you know we have already visited silver Banska Stiavnica and golden Kremnica town)

As we visited the city of Banska Bystrica during the difficult times (End of April 2020, with lots of restrictions due to COVID19), all shops and museums were closed, however, restaurants and café’s were under some restrictions open.

It’s time for a short walking tour.  We start in the upper part of the square,  surrounded by the gothic, renaissance, and baroque houses with its unique atmosphere. Especially, during the spring-summer-autumn season, it is full of outdoor restaurants, cafes, and numerous events.

The Clock tower
At the top of the square, there is the clock tower from the 16th century. I recommend to walk up (101 stairs) and enjoy breathtaking panoramic views of the Old town, Kremnicke hills, and Low Tatra mountains. As you can see, the tower is leaning (68cm) to the left, not only Pisa has its leaning tower, but also Slovakia;) 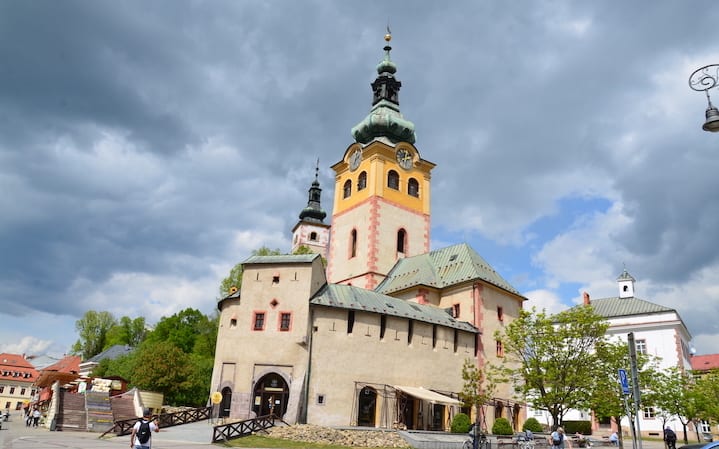 The dominant of the upper part of the square is the Town’s castle – as Banska Bystrica was a prosperous mining town and the castle was built to protect the town.

Interesting is that the castle was not built on the hill (like most of our castles), but was built inside the town’s center around the church of the Assumption of the Virgin Mary ( built by the Germans in the 13th century in the late Romanesque style, later rebuilt into the gothic style). The castle was fortified with bastions and moat. 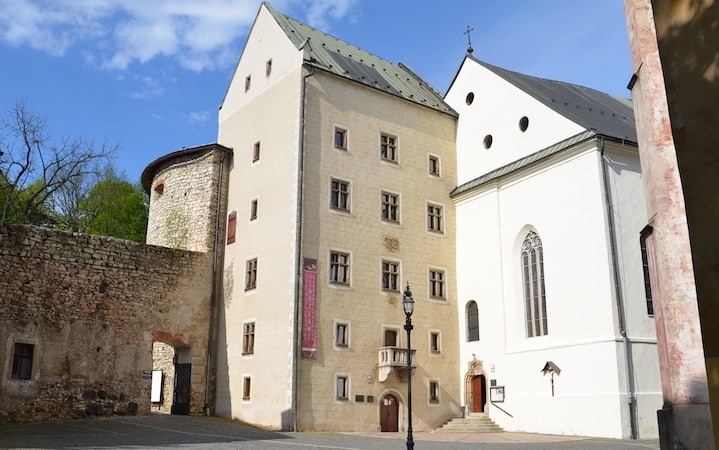 A gothic House of Matej (in the 15th century it served as a temporary residence of Hungarian King Matthias Corvinus and his wife Queen Beatric), the Slovak church (also called the Church of the Holy Cross), the renaissance Old town hall and the entrance gate tower called Barbakan.

A unique St. Francis Xavier cathedral stands in the upper part of the square, a copy of the Jesuit church of the Gesu in Rome is the seat of the Roman-Catholic Diocese of Banska Bystrica.

As we walk down the square on our left side is the architectural jewel – the Thurzo house (The house was the former headquarters of the Thurzo-Fugger mining company, Jan Thurzo and Jacob Fugger joined together
and became a leading world producer of copper by the end of the 16 century and one of the largest and most modern early capitalist firms. 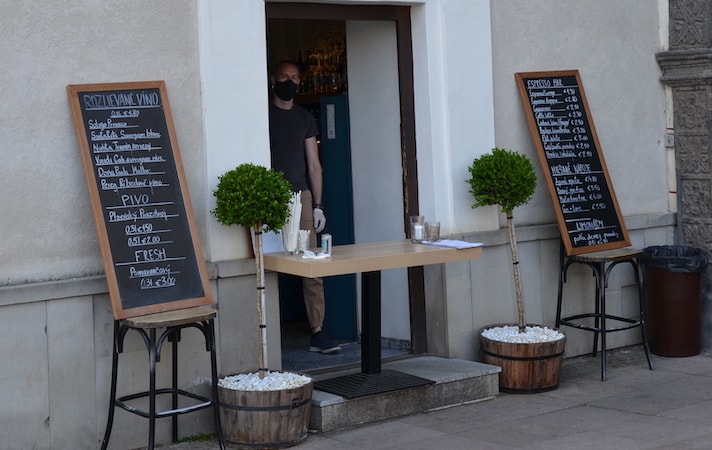 It is always a good idea to have a break, I personally love a coffee break and a small talk;). Open again with some restrictions (mandatory face masks, no entry – only takeaway is allowed), but, still a thousand times better than what I saw two weeks ago in Banska Stiavnica when the entire town was closed and it looked like a ghost town. 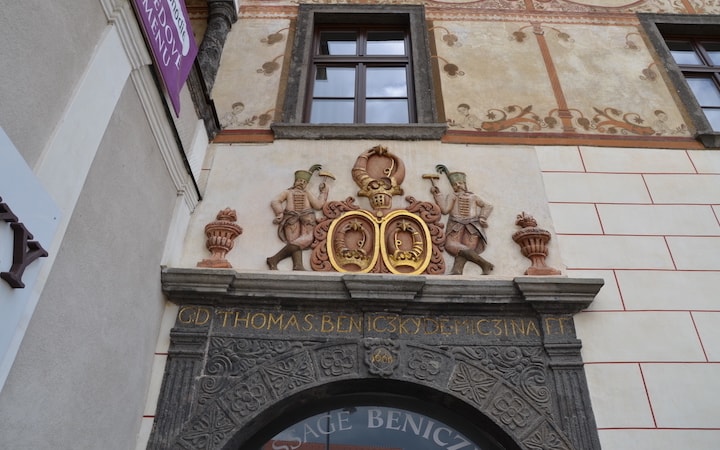 House #16, one of the most beautiful houses on the square, – the picturesque Benicky House – the renaissance portal with well-preserved coat of arms of the rich noble family (they were involved in the mining business in the past). 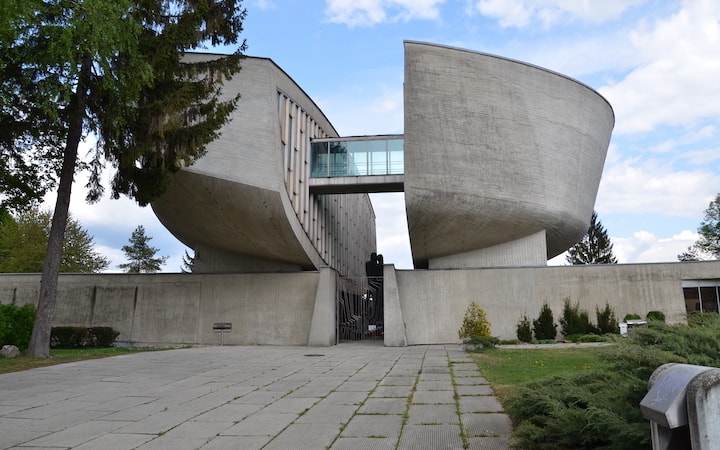 The town played a significant role in the Slovak National Uprising (SNP), when the armed resistance against the Nazi occupation started here on August 29, 1944.
The SNP museum gives comprehensive information about the uprising as well as WW2 and posts the WW2 period. 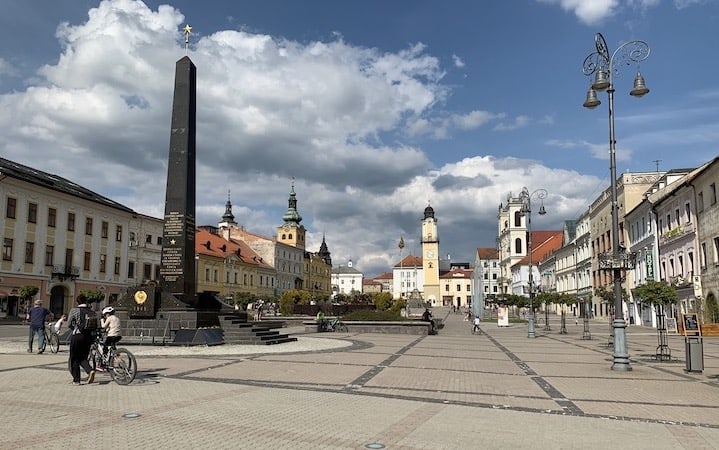 In the lower part of the square is a huge black obelisk – a memorial dedicated to the Soviet soldiers they liberated the city on March 25, 1945.

MARKET PLACE near the Barbakan castle 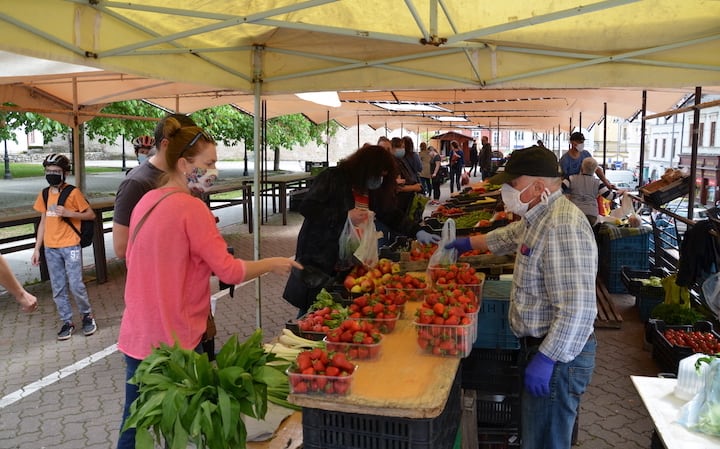 Before, it was just a normal market place, but now, during the COVID19 restrictions, it is a new revival, it is really great to see that the markets are open again (after two months of lockdown).

Famous Radvansky jarmok (fair) is held annually at the beginning of September. It has more than 350 years of history and belongs to the best and most favorite events in September.
You can see the presentation of folk arts, folklore ensembles, music groups, try Slovak specialties, and young wine called Burciak.

THANKS for reading my travel blog. I do believe it was useful, interesting, and motivational for you.

Would you like to visit this picturesque region of Slovakia?
We visit Banska Bystrica on our Grand Tour of Slovakia and Slovakia Heritage Tour or plan with us your Private Tour

The latest upcoming events you can find on our Facebook page.

WHERE  DO WE GO NEXT?
The next adventure is Sulovske Rocks. Hiking, drone videos, good pictures

WHEN WE ARE LIVE WITH  OUR “15 MINUTES THURSDAY TOUR”?
On Thursday, May 7, 2020
Check out our Facebook page
At 5 pm local time (Slovakia is on GMT +2) Live Stream from Sulovske rocks

WHO’S JOINING ME THIS TIME?
My family and my brother with his family. 4 adults and 4 kids;) 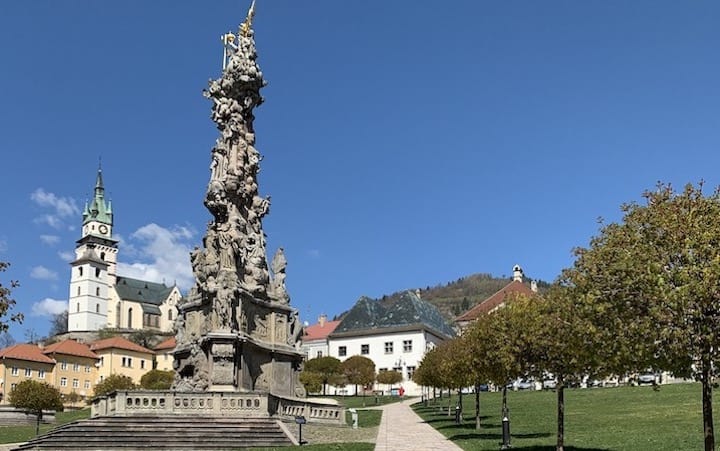